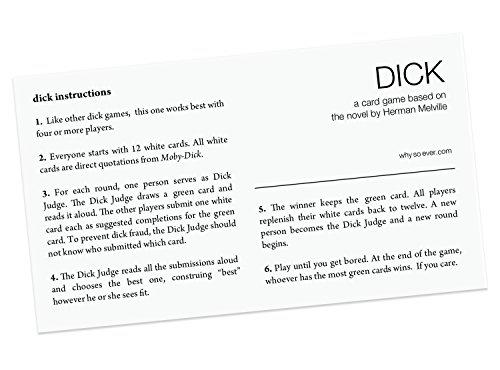 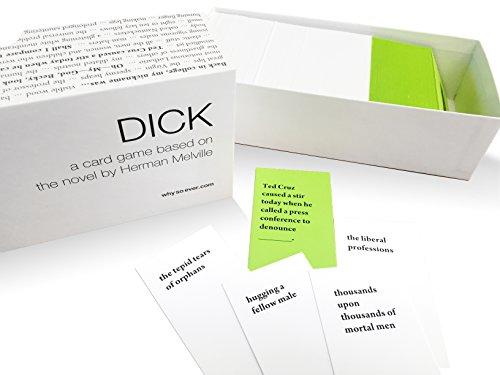 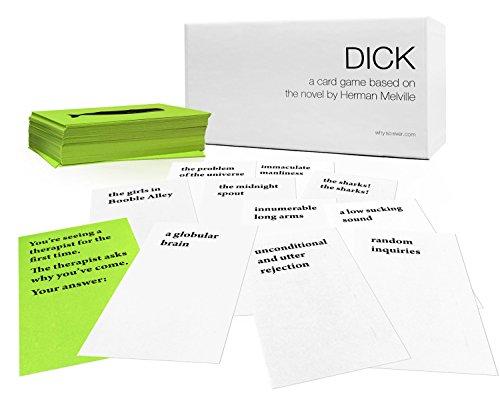 Dick: A Funny Card Game Based On The Novel by Melville

Dick is a party game full of quotations from Moby Dick. Moby Dick is a famous novel written by Herman Melville in 1851. This is a card game that is basically like Cards Vs. Humanity. It has however borrowed sections from Moby Dick with a little bit more inappropriate and adult-content jokes. The players will without a doubt enjoy this game despite not being a literary buff. In this game, the meaning is often plural as well as unstable, with some sort of inappropriate joke factored in from time to time.

Detailed information about Dick: A Funny Card Game Based On The Novel by Melville

This game contains one hundred queries that are suitable for modern times. There are also 375 answers that are borrowed directly from Moby Dick's pages. All there features combined in one game make it look extremely hilarious. It is good to mention that, not every fan of Moby Dick will like this game. It is a game for adults and with somewhat inappropriate content. It is advisable to keep it out of reach for children.

For every round, one player acts as a judge. He/she reads out a question loudly from a green card. He/she could also choose to read aloud a fill-in-the-blank prompt which is also available on the green card. The rest of the players then give out white cards, where each card contains a verbatim excerpt from Herman Melville’s novel. These quotations act as proposed solutions for the prompt. The judge then chooses the best submission after reading them all loudly. The decision is entirely up to the judge and cannot be disputed. The winner gets to keep the green card and everyone else replaces their white cards. The next player then takes up the role of the judge. The player that has the highest number of green card wins at the end of the game is the ultimate winner.