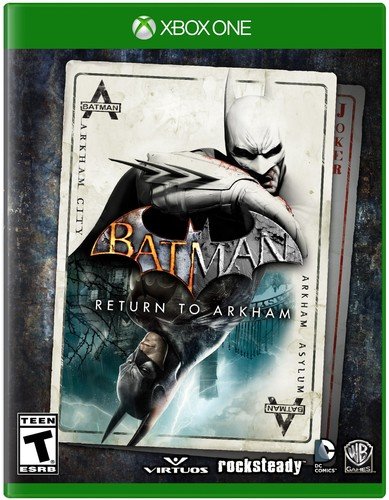 Superheroes can take on many forms. There are modern-day heroes in our lives like the men and women who fought in wars, the men, and women who help keep us safe like police and firefighters, and then there are the fictional heroes. Those heroes are the superheroes that have some sort of superpower. Those heroes originated from comic books. The two main comic book companies that created many people’s love for that genre today are DC and MARVEL. Perhaps one of the most famous/well-known heroes in DC is the one and only Batman. Batman started out as a small idea in 1939, but now 79 years later in 2018, he has been made into many comics, many movies, tv shows, and even video games. If you or someone you know loves Batman and plays video games, then we know just the perfect gift to get; Batman: Return to Arkham!

Batman: Return to Arkham is not a comic book and it is not a movie or tv show. It is a video game or well actually more than one video game per say. Batman: Return to Arkham is a 2-disc video game set. You have the game Batman: Arkham Asylum and Batman: Arkham City. The games are actually sequels to Batman: Arkham Knight and Batman: Arkham Origins.  Both games are very similar in which you take on the role of Batman in this open-world environment in which you solve clues, puzzles, fight villains and follow the amazing storyline. In Arkham City, you fight as Batman collecting gadgets, fighting off the classic villains you know and love such as the Joker. The game itself also has many side missions in which you can complete for greater rewards or things unlocked. The Riddler has also placed mini-challenges for you to complete and figure out. Another cool thing is once the game is completed (the main storyline that is) you can then play Catwoman and play a bonus story! In Batman: Arkham Asylum you have to defeat the Joker from releasing mayhem in the infamous Arkham Asylum! Both games are really amazing and give you tons of things to do!

We think that this game is perfect for birthdays or even Christmas gifts! It is recommended for teens 14 and up due to some mild language and action scenes in the games, but really it is up to you to decide if it is appropriate. Even if you do not have kids, you can buy this game for yourself as you really get a lot for your money’s worth. The whole ‘set’ is around $19 and you can do so much in the game. You can either follow the main story-line or take on the side missions as the choice is really up to you but you can choose the Batman outfit you want to wear, use whatever gadgets you want, ride the Batmobile, go to the Batcave and really get to be Batman! Next time you are looking for a great gift to get, keep this in mind as this could very well be just the perfect thing to get!

Like me! 1
Anne Klein Women’s Diamond-Accented Bracelet Watch
$34.99
5
Check it out!

Like me! 3
Sharpty Inverted, Windproof, Reverse Umbrella
$19.99
Check it out!

Like me! 2
Hanes Mens Pullover Ecosmart Fleece Hooded Sweatshirt
$21.86
Check it out!

Like me! 1
Lightshare Cherry Blossom Bonsai Tree
$20.99
Check it out!

Like me! 1
Delguard by Zebra Mechanical Pencils
$13.89
Check it out!