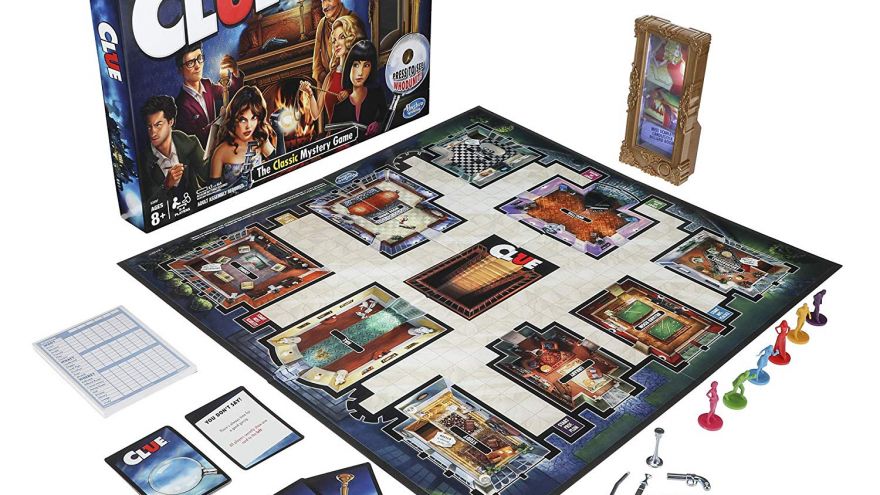 Everyone loves a good murder mystery, just look at how popular they are on television. For decades before that detective novels were a staple of fiction-making the name of authors like Sir Arthur Conan Doyle, and Agatha Christie.

The murder detective novel has become one of the most popular genres in fiction. So, it’s not surprising that our love of murder mysteries was also taken up by makers of board games.

The first murder mystery board game arrived in the mid-1930s, and it was called Jury Box. Each of the participants plays a member of a jury, and they were presented with evidence to decide if a person was innocent or guilty. It was not until after the Second World War that the grand-daddy of today’s murder mystery games first appeared. In 1948, the game called Cluedo in the UK, and Clue in the United States was released in both countries at the same time.

This simple clue solving board game became an instant hit, and it is still popular today. Its simplicity means it can be played by adults and children at the same time making it a family favorite. It wasn’t until the 1980s that a rival board came on the market with the How to Host series. This game was the forerunner of today’s role-playing murder mystery games for the home.

They are much more interactive and have complex scenarios with multiple characters. Many of the more intricate storylines can be used for the ever-popular dinner party mystery evenings.

Nowadays there are lots of different murder mystery board games available. Many take their concept from detective fiction such as Sherlock Holmes, while others create intricate storylines involving multiple characters and scenarios that need the deductive powers of a real detective to unravel.

Here are our five favorite murder mystery games which we know you’ll enjoy. 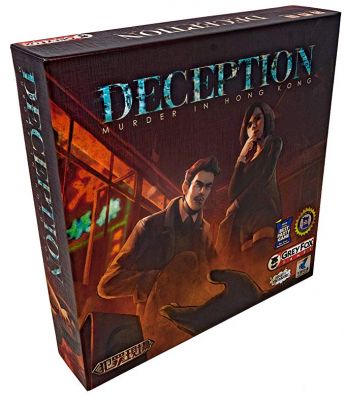 A lot of gamers suggest that this game has taken over from Clue as the must-have murder mystery board game. Deception uses an entirely different way to introduce players to the clues by giving asymmetric hints to point to the solution. No single clue will show you who the murderer is, and that’s why it makes this game much more like a real-life detection than many other games.

At the same time, the murderer is trying to cover their tracks by obscuring the clues and making it less visible who the killer might be. The players can collaborate in tracking down the murderer, but it will always be a matter of deduction to find the real killer.

What makes this game so different from many of the others is the use of fuzzy logic. Many of the clues are tangential, and you have to think outside the box to uncover the murderer.

The makers say a game will last about 20 minutes. However if you’ve got an excellent team of thinkers, a solution can be found much quicker. As there are lots of different scenarios, you can play game after game until you get bored or too tired to continue. 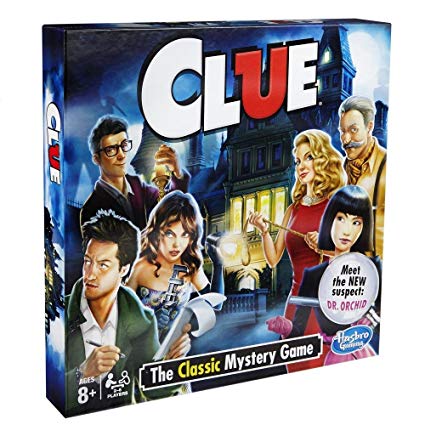 The oldest and probably one of the simplest murder mystery board games you can play. It’s been around for seventy years, so Clue has a rightful place as one of the authentic classic board games. With such a long history there are generations that have played the game at least once, so the rules and gameplay are familiar to most people.

The latest version of the game has updated rooms, guests and weapons, and a setting on a boardwalk along with the traditional millionaire’s mansion. The gameplay is straight out of an Agatha Christie novel. A character card, location card, and weapon card are hidden away from the players, and the object is to discover who did the murder, where, and with what.

Characters such as Colonel Mustard and Professor Plum have become icons over the years and one mention most people will know what you are talking about. Compared to modern murder mystery games the deduction needed to uncover the murderer is relatively simple.

When you discover a clue in the game, you are entirely sure that it will lead to the killer as it is based on precise logic and uses symmetric information. This is a drawback as adults may find the metaphysical certainty less appealing, however. 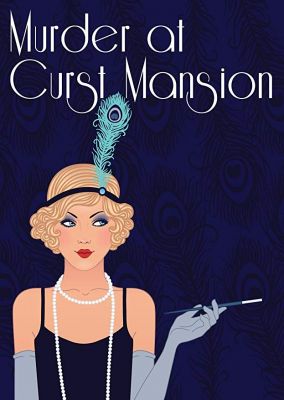 More expensive than a lot of murder mystery games available, Murder at Curst Mansion is much more than a board game, as it allows you to host your own dinner party murder mystery at home. For this, you need up to a dozen people to take part, and each one is given a character to play.

There are scenarios for 6, 7, 8, 9, 10 or 12 people to join in. So, it’s an opportunity for everyone to dress up in a fancy dress for the occasion. The game comes complete with invitations to be sent to all the participants, outlining the character they’re going to play and what their role will be in the mystery.

If you like you can always invite a thirteenth person to the party to play the detective and not use the disk enclosed. If you think this is an expensive way to play one game, then don’t worry. If you get hooked on murder mystery parties, Red Herring is offering new scenarios once a month. 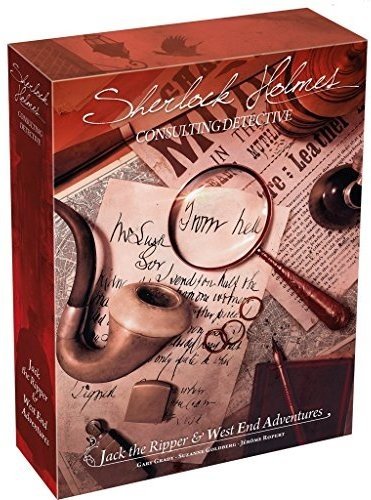 The Sherlock Holmes Consulting Detective series is one of the most famous murder mystery games available today. The franchise has several options, and this includes ten cases for the players to solve, including a series of Jack the Ripper murders in the Whitechapel area of East London.

The players become assistants to Sherlock Holmes called the Baker Street Irregulars. Working together they must study clues and follow leads so that they can answer questions from Sherlock Holmes at the end of the case. The game box includes newspapers, maps and a directory to help the players navigate their way around the city and create the atmosphere of Victorian London.

Players decide for themselves where to investigate and what leads to follow. When they think they have solved the murder mystery, they must answer Holmes’ questions to earn points. The player with the highest number of points wins. The Jack the Ripper case takes up four of the ten scenarios available in this box and is more graphic than others in the series as it is based on real events.

The other scenarios are more romanticized versions of Victorian crimes. These adventures are highly inventive, and with a casebook to guide you through the investigation, and lots of additional information, solving the crimes can be challenging and rewarding. 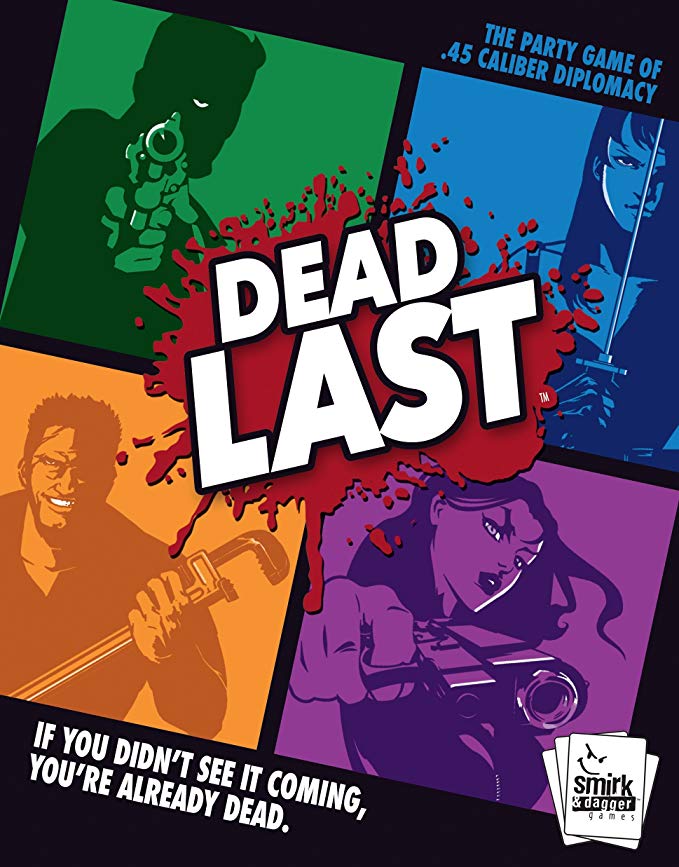 The scenario of this game is all in the name. The objects of the game are not to be killed by accident or murdered and survive. The game starts out with between six and twelve players, and as things progress they die one by one. With the game play of between 45-90 minutes, it’s a matter of deceit, betrayal and shifting alliances to become one of the last two participants alive at the end.

Each player adopts a color at the beginning of the game. It’s then that the others try and conspire against each other to become one of the last players standing. The idea is for players to select one target and have him or her die as part of that round without suffering an accident.

At the end of each round with two players left in the game, they have to decide how to share out the loot. This is where bluff and double-bluff can come in as there are up to four loot cards to win, with the options for sharing, stealing or grabbing. As players amass loot from each round of the game, the first to 25 pieces of loot is the winner.

A game can take anything from 30 minutes to 45 minutes depending upon the number of players and the speed of play. 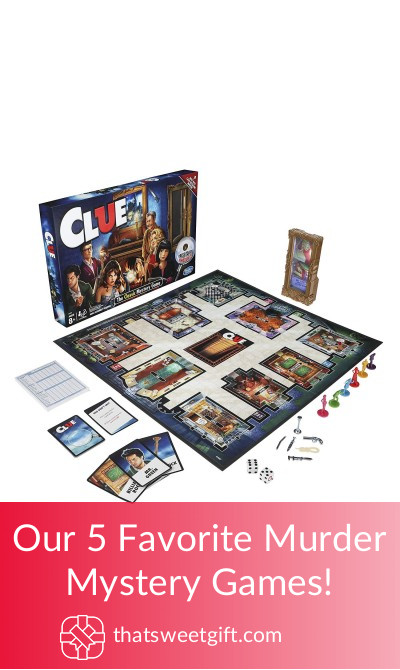