Is Harry Potter a True Story? We’ve Investigated for You!

We all know and love the Harry Potter franchise, but had you ever thought if any of the story is true? Sure, we all waited to get our letter to go to Hogwarts each summer (still waiting for mine!) but is there any truth to any of the stories, or the characters?

Of course your first instinct is to say no. When’s the last time you saw a wizard fly by on a broomstick, or a person turn into a cat? We’re going to go ahead and safely guess never- unless you happen to be visiting The Wizarding World of Harry Potter in Orlando!

Believe it or not, it has been over 20 years since JK Rowling released the first Harry Potter book- Harry Potter and the Philosopher’s Stone. 20 years! Over the past two decades we have come to know and love Harry, Ron, and Hermione through the entire book and movie series.

As it turns out, there may be more truth to the Harry Potter story than we first thought! While the story itself isn’t true (sorry- you’ll have to just keep waiting for your Hogwarts letter, too) JK Rowling drew a lot of inspiration from her life and people she knew as she created this fictional world of wizards and muggles.

Here are some of the top aspects of the Harry Potter story that are actually true!

1. The Philosopher’s Stone and Nicolas Flamel

Remember Nicolas Flamel from the series? He is actually a real person! Flamel was an alchemist who lived during the 14th century. Not only was he a real person, he also dealt with the Philosopher’s Stone which he said was the key to immortality! This was the inspiration for the name of the first book and movie of course. The Americanized title calls it the sorcerer’s stone- that is the same thing!

Interestingly enough, Flamel is thought to have died at the age of 88 (which is quite impressive given that he died during the 15th century where the average life expectancy was around 30 or 35 years old). However, once he died people were clearly interested in finding this incredible Philosopher’s Stone that is said to grant immortality. It was never found! Maybe Flamel lived after all!

In Harry Potter, Voldemort of course wanted the Philosopher’s Stone for himself to achieve immortality. He was not successful in his plan to get the stone, and Flamel famously destroyed the stone in order to keep everyone safe.

While no, there is no actual Harry Potter, he was based on a real person! JK Rowling drew her inspiration for The Boy Who Lived from her neighbor Ian Potter who lived just four doors down from Rowling when she was a child. Similarly to Harry, Ian was very mischievous and apparently got into plenty of harmless fun over the years, doing things like placing slugs on people’s food plates, running through concrete, and even dressing up as a wizard. It’s as if he knew he would one day be the inspiration for the most famous wizard the world has ever known!

Hermione, everyone’s favorite character (or- our favorite character anyways!), and the epitome of girl power was also based on a real person. We all wanted to be as smart and cunning as Hermione, and we all know Harry and Ron wouldn’t have stood a chance without her help! So, who is the famous redhead based on? None other than JK Rowling herself!

JK Rowling apparently shared a lot of the same personality traits as Hermione when she was a teenager. She was just as studious and driven as Hermione. Honestly, that makes a lot of sense, considering she worked hard to create an entire fictional world and write one of the most popular book series ever. Talk about an overachiever! Rowling is said to have exaggerated those qualities when it came to Hermione to ensure she was a strong female character. We love JK even more after knowing that!

4. Some of the Spells

Well, sort of. They are based in truth based on their word origin! JK Rowling didn’t just make up words like ‘Accio’ or ‘Wingardium Leviosa,’ they are based in Latin root words. We absolutely wish that spells like Accio were true when we need to summon something and don’t want to move. Unfortunately, the spell isn’t real, but the word comes from the Latin root word accerso which means to fetch. Pretty cool!

As for Wingardium Leviosa (which was the levitation spell), it is based on Latin roots wing (meaning flight), ard from the root word aardus which means elevated, and levi, which means to lift. It all makes sense! JK Rowling did this with many spells to ensure they were seen as accurate. We think she did an excellent job!

While most spells we wish were true, we must say overall we are thankful that they are not so we don’t have to worry about spells like Avada Kedavra or Crucio. Yikes!

Turns out, you actually can travel to Hogwarts! It might not be as a result of receiving your letter in the mail, but hey, take what you can get! Parts of the movie franchise were actually filmed at an actual castle that you can go and visit today. The castle itself is called Alnwick Castle and is located in Northumberland in the UK. Next time you are planning a trip across the pond, considering stopping by to take in the beauty that is real life Hogwarts!

Surprisingly, only the first two movies features shots of Alnwick Castle. After that, once the franchise had become a serious hit, the movies began filming at a filming studio. However, it is still incredibly cool that there is a castle as grand and magical as Hogwarts in real life, and we think it should absolutely be on your bucket list to go and visit- it’s on ours!

While Harry Potter itself isn’t a true story, there are a lot of truthful elements that make up certain characters and certain aspects of the story. From real life alchemist Nicolas Flamel, to inspiration for major characters like Harry and Hermione, to the real Hogwarts castle, and the origin of some of the most popular spells, there is more truth to Harry Potter than meets the eye!

If you did get your letter to Hogwarts, what house do you think you would be sorted into? Let us know! 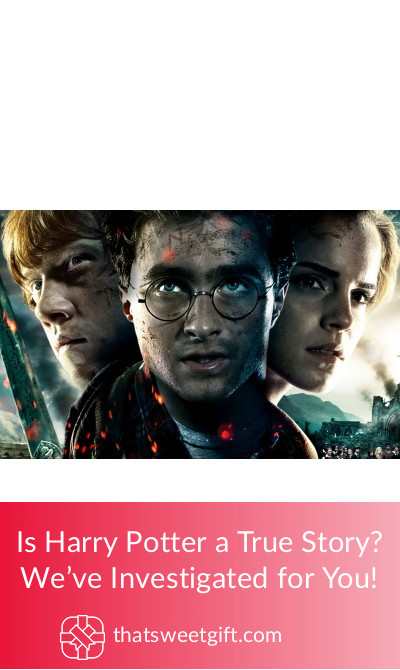