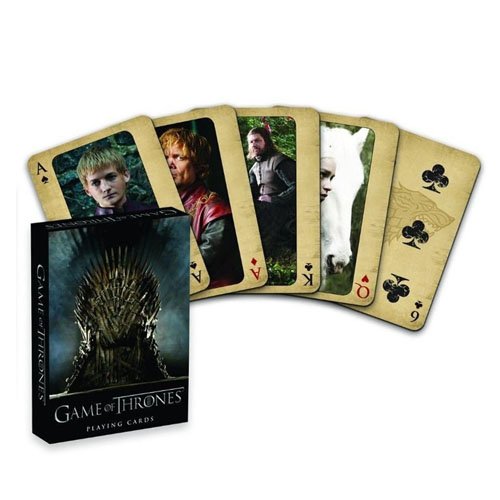 The award winning Game of Thrones television series made by HBO is arguably one of the most popular TV series ever produced. There are so many people who follow the politics of this series that it is no wonder that someone has brought out a playing card deck based on the series.

The characters are purely based on Series 1 so there are many characters that don’t appear in the Court cards who would make this card deck a very special addition to anyone’s Game of Thrones merchandise collection. As it is the Game of Thrones Playing Cards by Dark Horse Deluxe, does a good job allocating the families to different suits.

But if you know of a Game of Thrones follower who likes to collect merchandise then this is the gift to buy them. The cards can be used as a normal deck as each of the usual cards is present together with two jokers. And in addition to the usual playability of these cards there is the added quirkiness of having all the main characters of Series one present in one place.

This is a gift to buy anyone who enjoys Game of Thrones and likes to play cards. Just imagine what will happen when the gang comes around for a binge Game of Thrones session and the playing cards are brought out. All we can say is that the host should keep an eye on the deck or else it might end up in someone else’s coat pocket when it’s time to go home.

They are made from a strong and sturdy plastic coated card which has been artificially discolored so as to give the appearance of age and mis-use. The font used on the cards is different from normal cards too and could be difficult to read for some people.

However the font is somewhat similar to that used on some decks we have seen from parts of Continental Europe so the idea might be to impart that impression. The card deck is a fully licensed game of Thrones merchandise base on HBO’s award winning television series.

The deck is the same size and contains the same number of cards as a standard deck: 52 playing cards plus two jokers

One of the good things about this deck is that you don’t need to have any knowledge of Game of Thrones in order to play with the cards. Just treat them as normal playing cards.

Like me! 0
Kids Against Maturity: Card Game for Kids and Families, Super Fun Hilarious for Family Party Game Night
$17.49
5
Check it out!

Like me! 1
Before Patients, After Patients Coffee Mug & Stemless Wine Glass Set
$26.95
5
Check it out!